Yesterday was New Years! Out with 2014 and in with 2015! I know many people talked about their resolutions yesterday, but I posted something else yesterday and I wanted to really think these out. 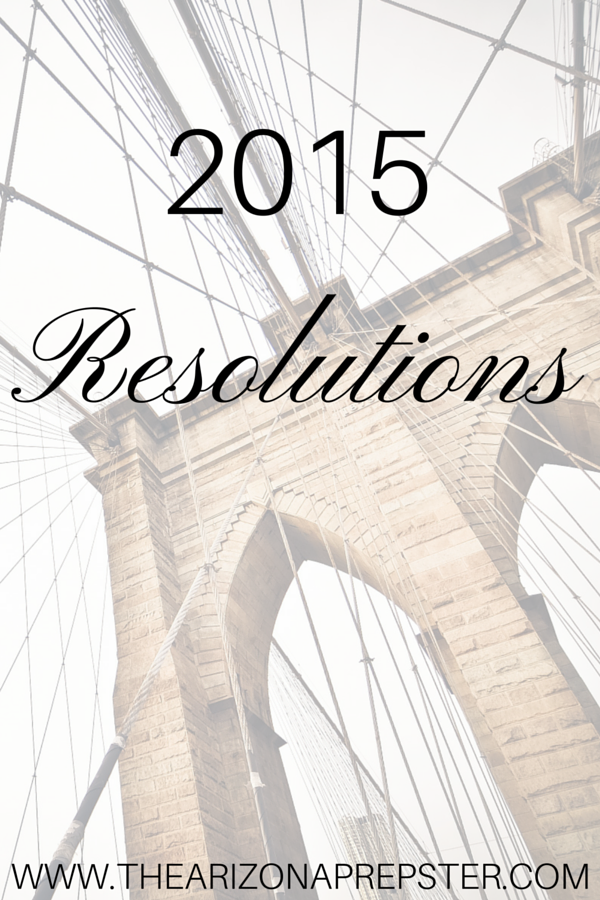 Here are my five resolutions:

One Spring 2015 Dean’s List: Fall 2014 I made the Dean’s List again. I’ve now made it in all three semesters that I’ve been at Arizona State which is a huge accomplishment for me {let’s just say high school wasn’t the best time for me}. I’m very proud of myself and the accomplishments I’ve achieved at ASU. Of course, I want to continue this trend so I will work hard to make the Spring 2015 Dean’s List!
Two Clean and Organize: Organizing is my addiction and {when I’m in the mood} cleaning is my sport. I want to clean and organize the apartment. There were some things I brought to the apartment from my dorm that we don’t use, at all. Even though our apartment is bigger than my dorm was, it’s still small and the closet space that is currently being eaten up by junk is precious. There are definitely some things that I either need to A) mail back to California and deal with it there or B) get rid of altogether. I really want to clean the apartment and make it all neat and spacious {when it’s clean it looks and feels bigger than it is}. Clean apartment = happy couple! {most of the time}

Three Travel Internationally: I’ve always wanted to go to Italy and Europe; and now that Matt works for U.S. Airways we are probably going to get to this summer! Now, some of you know that I get major anxiety while flying sometimes {how ironic} but I think I would be able to manage that if I could travel internationally. I honestly didn’t think that I would get to travel internationally for awhile but now it is closer than I’ve ever imagined! Who knows, The Arizona Prepster might go international!

Four Get Healthy: I know this may sound like one of those cliche resolutions but I don’t mean “go out to the gym five times a week and eat only healthy foods” because I could never do that. I mean drink less soda, drink more water, eat less fast food and eat more home cooked food; also, go to the gym. I can’t go from 0-100 with getting healthy, I don’t think anyone can {probably why most of those gym resolutions fail after January}. My resolution is to do what I can do, I know I’ll slip up but to get back up and on the right track is what this resolution is really about. I’ve tried this before and slipped up and just let it slide; so my resolution is mostly about not letting the slip ups discourage me.

Five  Be Happy: Now this is usually a given but sometimes in the hustle and bustle of life you forget to sit back, relax and just be happy. I’ve learned that sometimes things just happen and you can’t control it. There is no reason to let it get you down; everyone has something that makes them happy. You’re breathing aren’t you? Just let things happen the way they are going to; if you can’t change it, don’t let it change you.

If I remember {I’ll put it in my planner} I’ll update you every month on these resolutions and how they’re coming along!

What are your resolutions?

Hello there! It’s the end of the month and that means that it’s time to go over my February traffic… Hey there! Today I want to talk inspiration! Blogging takes constant inspiration, not just for content, but for wanting to…

Hey guys! So this is my first post on here (yay)! I’m so excited to share my journey of being…

Happy Friday! I hope y’all had a productive week and are going to have an awesome and relaxing weekend! I’m…

Happy New Year everyone! I hope everyone had a fun and safe night last night! 365 days ago I was…