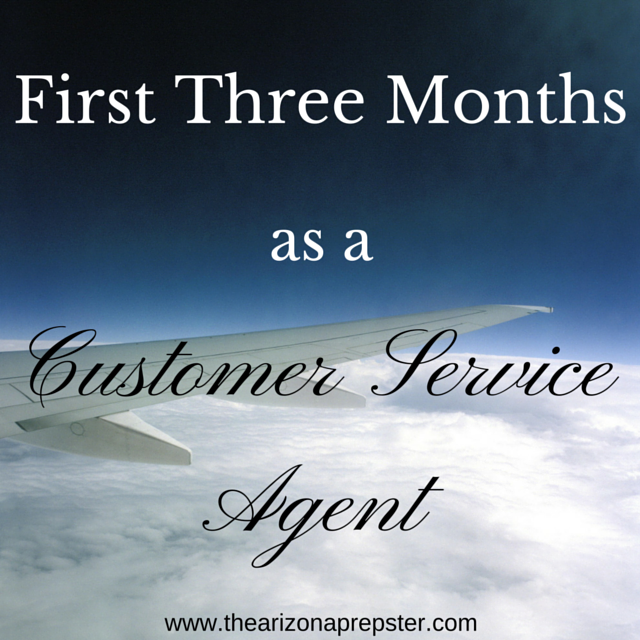 As many of you know, for the past three months I’ve been working as a gate agent {customer service agent}. This past weekend I wrapped up my 90-day probation, without any discrepancies or write ups! I cannot believe that it’s been 90 days already, it feels like it’s been so much longer. Even some of the other agents feel like some of us have been on the floor for much longer.
Here’s the timeline:

My first three weeks were spent in classroom training. It was hard, long, and stressful. The next three weeks were spent doing on-the-job training; where we were paired with an agent and they “supervised” us and let us get hands on experience. {I put “supervise” in quotation marks because my trainer just had me jump right in and I did very well}. After those three weeks, I actually went back to classroom training for one week. Since American Airlines and US Airways are merging, they created an entirely brand new system, which we have to go to training for. Originally, my week was the week of August 17, the first week of school. I asked to go earlier and they put me in the week after my OJT. So, I spent seven weeks in training, and it felt like forever.

So here I am 90 days later and I feel pretty confident in my abilities for day-to-day operations. Irregular operations still scare me, but you won’t learn until you are put in those situations. With school starting, I’m pretty stressed out. I just got switched to the night shift Saturday, Sunday, and Monday and then I have class at 9am on Tuesday. Yesterday was my first day of class after that switch and let me tell you, I was tired.

Overall, these 90 days have definitely been pretty eventful. I’ve met so many great people that I enjoy working with. I’ve encountered some really kind customers but I’ve also encountered some pretty rude customers. Also, with this being my first job, I’m learning a lot about myself. It’s definitely an adventure and I’m trying to enjoy it to the best of my abilities!

What was it like during the first few months of your first job?