Wow February seemed to fly right by! With there being exactly 28 days in the month, it does seem to make it fly by! Here’s my second update on my resolutions! 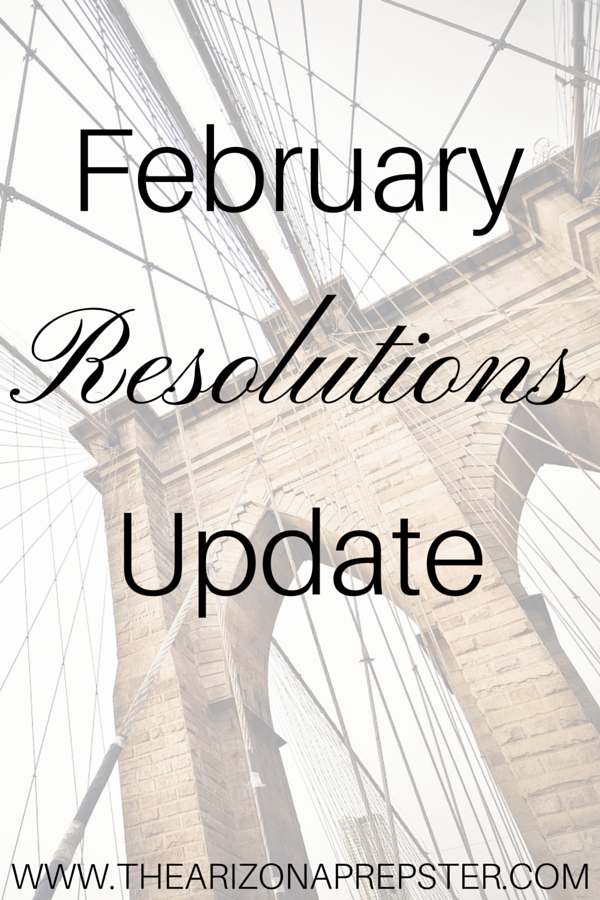 One  Spring 2015 Dean’s List: Well, this seems to be the semester where my professors don’t really put in grades on to Blackboard. I think I’m doing well but I since nothing is graded I really have no idea {which is really frustrating}

Two  Clean and Organize: Now that I’ve gotten in to the bulk of the semester I haven’t had as much time to clean but I have kept it at the same level as the beginning of the month. It s clean but not as clean and organized as I would like.

Three Travel Internationally: Sigh, this is still not done and I’m not even one step closer to it. With it being February there isn’t much time to travel internationally, but I did travel so I guess that counts {sort of}. I hope to get this one done but I may not get to…darn.

Four Get Healthy: I’ve seemed to slide a little bit on this one. I still drink water but now instead of two cans of soda sometimes it’s one and a half. I also haven’t eaten as much of the lean cuisines. March should be better though. It’s always back and forth with me.

Five  Be Happy: This month I’ve been pretty happy! There was Valentine’s Day, traveling, Palm Springs is coming up and so is our anniversary! This is definitely the resolution I’ve been doing the best on, which is totally fine with me!

How are your resolutions coming?

We are already halfway through 2016! Can you believe it? Since June is over, it is time to share my… Happy Wednesday! I know I didn’t post on Monday, but I have been crazy busy with midterms, which have taken…

Happy Tuesday! The long weekend is over {sigh} but having only one class a day makes it a bit easier….

It’s already been two days since Christmas! I meant to post this yesterday but my plans changed and I was…

Hey there! I’m starting a Bullet Journal Supplies series on my blog. I know that you don’t need anything too…