January is already over so it’s time for my first update on my 2015 resolutions {see here}. 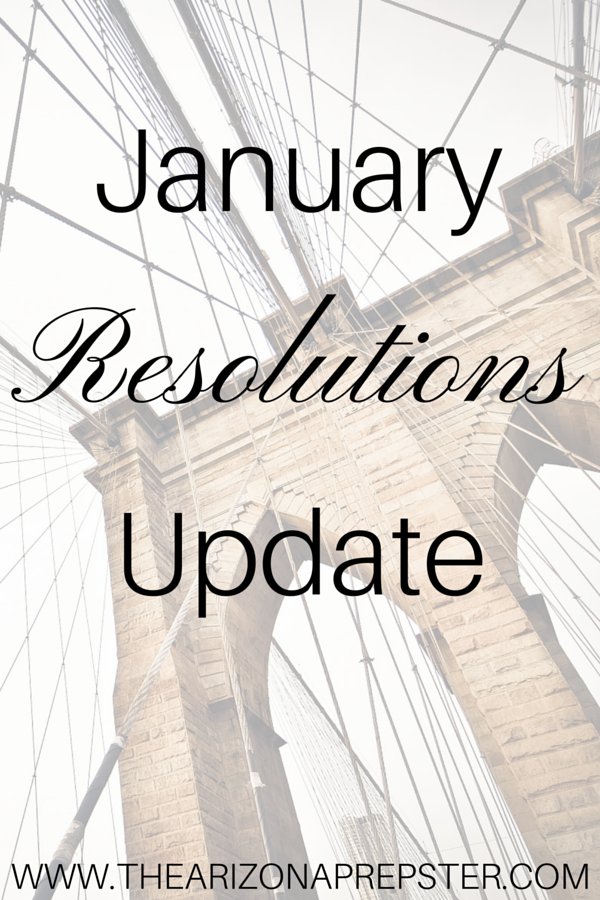 One  Spring 2015 Dean’s List: Well the semester only began almost three weeks ago and I haven’t had much-graded work so as of right now none of my grades have been reported. I have been working on getting assignments done and doing required readings so I think I’m on my way!

Two  Clean and Organize: Since Gary left, I’ve been trying to clean and organize. It’s been working, the apartment has actually stayed pretty clean since the semester began {which is a big accomplishment}. Sometimes the laundry piled up too much or the trash in the bedroom got neglected while taking out the main trash but overall it has stayed pretty clean!

Four Get Healthy: I started this resolution after Gary left because when he was here we ate out and I didn’t want to be a boring eater {and I’m not going to pass up some amazing BBQ!}. Since then, I have cut down to only one Pepsi {or fountain drink from fast food} a day and have tried to drink at least one water bottle a day and glass of milk or juice. Eating wise, Matt and I have eaten at home most of the month {well when he works he eats dinner at the airport but it’s not that expensive}. I’ve been eating a lot of lean pockets and lean cuisines {so delicious} and have been eating smaller portions of pasta when we make it. Also, on Monday January 12th I started the 30 day ab challenge! Today is day 19, only 11 days left! Here’s my first post: 30 Day Ab Challenge and my update: 30 Day Ab Challenge Update. However I think I may have to take a break of the ab challenge or plateau it; it seems to be messing with my body and hormones so we’ll see!

Five  Be Happy: This month I have been pretty happy {except with the body issue}. Although school has started and Matt has been working a lot we still get to do some cute things and spend time together. It is nice to have something to do so school starting has actually helped me stay happy by not letting me sit around like a blob. Also getting healthy has kept me happy as well! This has definitely been a positive first month of 2015!

Need a refresher on my resolutions?
2015 Resolutions

If you chose to do some resolutions, how are they coming along?

Hey there! How are you? It’s been a minute since I posted here and I have missed you. It’s been…

During my senior year of high school, I participated in a program called Every 15 Minutes. It was one of…

TGIF! My first week of class is done! {Well technically it was done yesterday but shush!} One Wedding Invite: On…

Happy Monday everyone! Today I begin the second half of my sophomore year at ASU! I can’t believe that by…

MERRY CHRISTMAS!!!! I’m so excited to spend the day with my family and Matt. I can’t wait to tell you…