We’re now three months into 2015; we’re one-quarter of the way done…already! That’s crazy! Here is the March update for my resolutions! 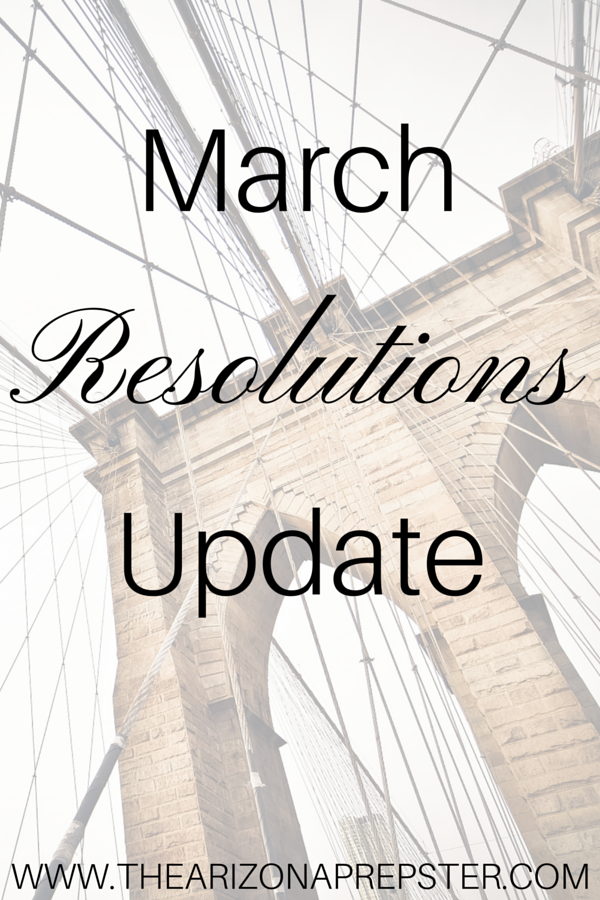 One  Spring 2015 Dean’s List: Grades have finally begun to roll in on Blackboard and I’m doing pretty well! Not all of my classes have reported grades so I’m still not completely sure. But I have A’s and B’s so I’m working on it!

Two  Clean and Organize: I’ve been slipping with this one since Spring Break. After Spring Break I added basically two classes and I’ve been SWAMPED! I’ve made a schedule about cleaning on the weekends and I’ve still done pretty well; just not as well as I would have liked to do.

Three  Travel Internationally: I don’t know why I still have this one up right now; it’s the middle of the semester. There has been no progress towards this goal. {I know, sad} I have traveled domestically though so it somewhat counts!

Four Get Healthy: I’m drinking up to two sodas and about a bottle of water a day. We’ve eaten less fast food and I’ve started to eat at Cafe West again so I’m getting some variety {and portion control}. I definitely need to drink more water as the temperature is in the 90’s now.

Five  Be Happy: I’ve been very happy this month! I got to see my family, spend time with Matt and now I’m part of Her Campus ASU {and run the Twitter!}. Although school has been a bit stressful, I’ve spent more time out on campus and just being happy!

Are you still working on your resolutions?!

I can’t believe that 2015 is almost over and so is my first full year of blogging! This year has…

First off, I want to say that I’m all signed off on my training and am officially a gate agent!…

Happy Veteran’s Day! Today is not only about not having school, although I know a lot of us are very…

Moving into the dorms is an exciting time. You’ve already met {or talked to} your roommate and you’re ready to…

I love when it rains, and it doesn’t rain here often. However this year El Nino us going to be…