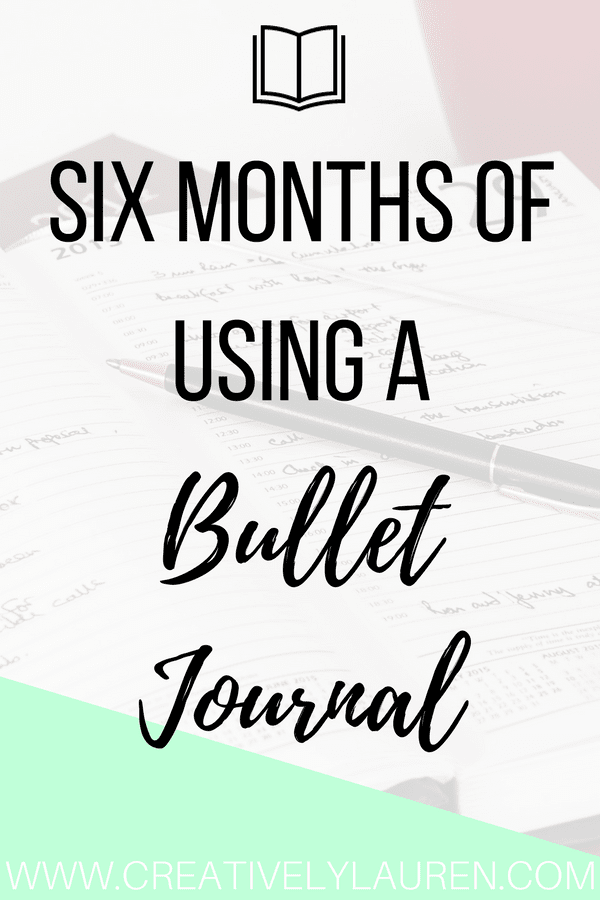 So in October, I started using a bullet journal. I got a dotted Moleskine journal, went over to Pinterest and began my bullet journal journey. I had no idea what I was getting into, but I knew I was getting tired of traditional planners that I felt like I would get bored of and stop using.

So, with that, it has been just over six months since I started using my bullet journal and I have been obsessed with it! I use it as a planner as well as a journal. I plan my day and everything and then in the space that is left over, I write about how my day went and anything exciting that happened, if anything. I did this in hopes of it helping my memory. I feel like I forget things often and I felt that if I got in the habit of writing more often and writing down how my days went, then it would help my memory. I also wanted to do this to be able to look back at the time that had passed and see what I had done, and how I felt over that period of time.

The awesome thing about using a bullet journal is that you can make it however you want to!

What’s even better is that one of my coworkers also uses a bullet journal! She started after me, but there was one night at work where we had to stay for a late flight and we both were just looking at each others bullet journals and talking about what we wanted to do with it! It was so nice to see someone I know and work with to be as interested as me!

I definitely believe that if traditional planners are not working out for you or you feel like they don’t represent you, then you should definitely try a bullet journal. After six months, I have not given up on my bullet journal. There was a week or so where I didn’t do the daily journal aspect and it was a pretty busy week at work and I was just too exhausted. Even after that, I felt really bad that I didn’t keep up with that. It actually bummed me out, I’ve been that obsessed with it and it has helped me that much.

Have you used a bullet journal before? Let me know in the comments!