Today I wanted to talk about something that I have wanted to share for awhile. At the beginning of the year, if you follow me on Twitter, I was talking about quitting my honors program, but I was on the fence about it. Basically, I didn’t know if I wanted to continue to struggle and be miserable, or drop that part of my college experience and be free to be happy. Well, if you read the title of this post, it is clear that I did that latter. I wanted to explain why in case anyone else is feeling the way I felt and doesn’t know where to go next. 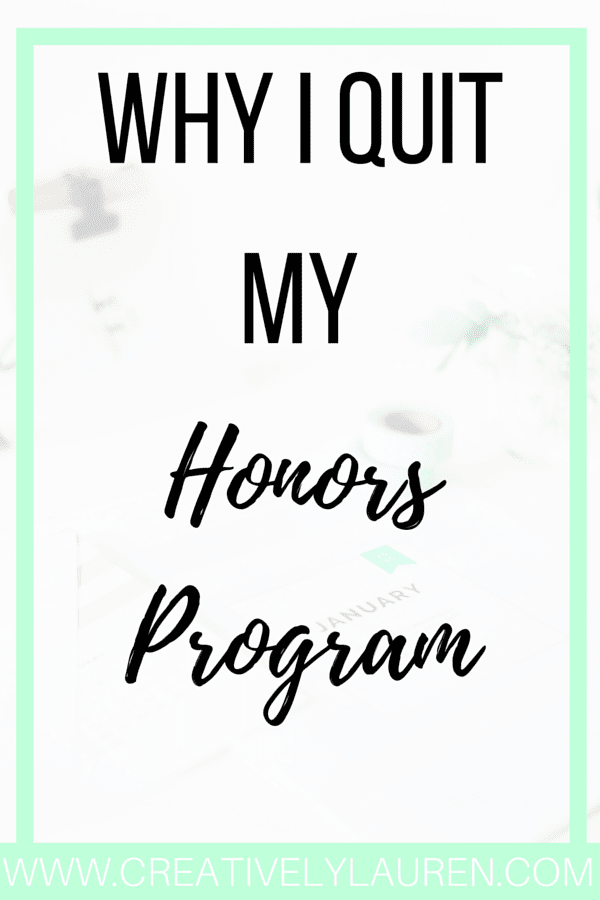 So, I quit my honors program. That was definitely a tough pill to swallow at the time because I refuse to quit things, even if I know I should. {you know, like this situation} However, after talking with my family, and some other fellow college bloggers, I finally had made the decision to drop out of the honors college. It definitely stung for a little bit, but I knew it was the right decision.

Let me give you some backstory. I was accepted into Barrett, The Honors College in the summer of 2015, beginning in fall 2015 on track to graduate spring 2017. I was admitted as a junior so I was basically two years “behind” on starting the thesis and whatnot. That fall semester was absolute hell. It was HORRIBLE. The honors class I required to take killed me, it just was not for me. On top of that, I was told that I would be done with my degree fall 2016, however, I knew that I would not be able to get my thesis and everything done in that amount of time. So, it quickly became a choice of accelerating my thesis and putting added stress on myself but graduate early, staying the extra semester to be able to finish my thesis “on track” and graduate at my regularly scheduled time, or leave the honors college and graduate early. Well, I chose to leave and graduate early, and I was so excited to be able to graduate early. However, these weren’t the only reasons that I chose to leave the honors college.

There isn’t much to explain with this one. It is hard for me to make new friends, but it’s even harder when these people have already been in this intensive program for two years, or they already knew each other before joining their junior year. I, on the other hand, did not really know anybody from the college before joining, which made me feel like an outcast. I also do not live on campus, or have an on-campus job, so I don’t spend much time on campus. I don’t blame the college for this, Barrett is just big on being a family and I really didn’t feel like I was a part of it.

The courseload became too much for me

As you know, I work an actual job outside of school. I work that job on the days that I am not at school, which means that I don’t really have much spare time to spend doing more than my already rigorous upper division classes. Even though there weren’t many added classes, what was added became too much for me. I hadn’t even started the thesis when I decided to quit, yet that is the main reason I decided to leave. I knew that the thesis project would be way too much for me to handle, and I wanted to get out before I was already too involved in it.

Philosophy isn’t for me

I did not realize in the beginning that the honors college was a lot of philosophy, and I mean A LOT of it. I was never into philosophy, and in my mandatory class when I realized how much philosophy was in the program, I knew I had to get out. I have nothing against anybody who loves philosophy, I just could not get into it, I did not understand it, it literally just made my head spin. I also could not, at the time, find a way to incorporate philosophy into my major which is basically a business degree. That was the point of the thesis and I had no idea what I was going to do.

It was causing more stress than it was worth

I get it, college is stressful. A regular bachelors degree is stressful enough, add a rigorous and extensive honors curriculum that is supposed to be complete in two years, plus a job, plus a blog that you’re trying to expand and suddenly you’re six feet under and have no idea how to get air. You can ask Matt, I was freaking out almost all of the time, it was horrible. I felt horrible, I could not focus on anything, and I was just very unhappy. It had gotten so bad that my mental health really was starting to suffer. I was so stressed out that I was stuck in my own head and could not escape. After coming to my senses, that is where I drew the line. You should never do something that is hurting you mentally because of its prestige.

“You should never do something that is hurting you mentally because of its prestige.”Click to tweet

That right there is the main reason why I decided to quit my honors program. After talking with family and friends, I realized that my mental health is the most important thing and that if this program was causing me to suffer, I should discontinue it. That is what I want to share with you. If you are in a similar situation, you really need to sit back, talk with trusted friends and family, and do what is best for you. Please don’t suffer in college because you think your family will hate you choose a different path. You just have to be open and honest.

To this day, I have no regrets about leaving the honors college. I have no grudges against Barrett or anyone in it. I wish them all the best. I’m also happy and proud of myself that I will be graduating this December, one semester early!

So there it is. That is why I decided to leave my honors program, and I couldn’t be happier. Have you made a tough choice before?! How did it go? Let me know in the comments!

Have you heard of our new E-book for college students, How to Blossom in College? Expand out of your comfort zone and get the most out of your college experience with HTBIC. Sign up for it here!

Happy hump day! This week’s Wednesday Wardrobe Challenge is all about neon! I’m not a big fan of neon clothes;…

Hello! Next week, {most of} us college kids head back to the classroom for the spring semester! If you’re like…

So, my first week of training is over, and I’m so excited! I know I didn’t post on Wednesday, but…

It’s almost Friday AND one week until Thanksgiving! This week’s Crafty Thursday will be about some cute DIY Thanksgiving projects…